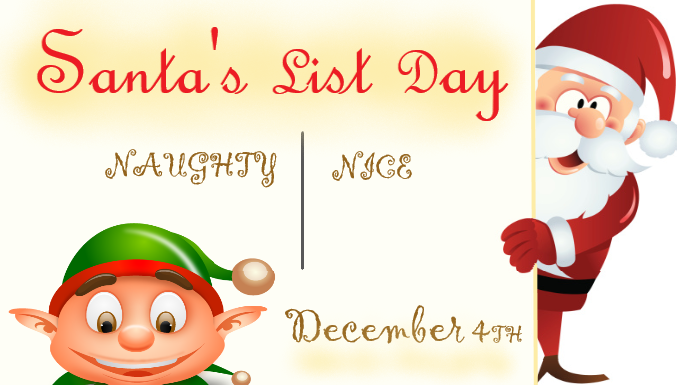 Santa’s List Day is an entertaining holiday. On this day, Santa Claus makes lists with obedient and naughty children. Children who have behaved diligently throughout the year are put on the obedient children’s list. They will receive presents from Santa Claus at Christmas. Children who disobey their parents will be put on a different list. Therefore, children behave especially diligently on this day and start making their wish list for Christmas. It’s a special time that brings us the spirit of Christmas.

The story of Santa Claus begins in the III century. At that time there was a monk, Saint Nicholas, who wore red robes. He was notable for his care for children, so after his death people remembered him with warmth. Stories about him lived on for many years and spread around the world. During this time, St Nicholas’ name has changed slightly and we now know him as Santa Claus.

The first mention of making lists with obedient and naughty children appeared in 1934. Then J. Fred Cootes and Haven Gillespie wrote the song ” Santa Claus Goes to Town”. It tells of Santa Claus observing everyone and noting the behaviour of children. He makes lists with the good kids and the naughty kids. And whoever gets on the second one is out of luck.

Everyone knows that Santa Claus has helpers – elves. They watch over the children all year round and help Santa make 2 lists. They also help to collect presents for the children. Santa’s list day helps children analyse their actions and monitor their behaviour. On this day, children start thinking about their Christmas presents and make a wish list. By the way, if you are thinking about presents, we recommend you learn about Free Shipping Day.