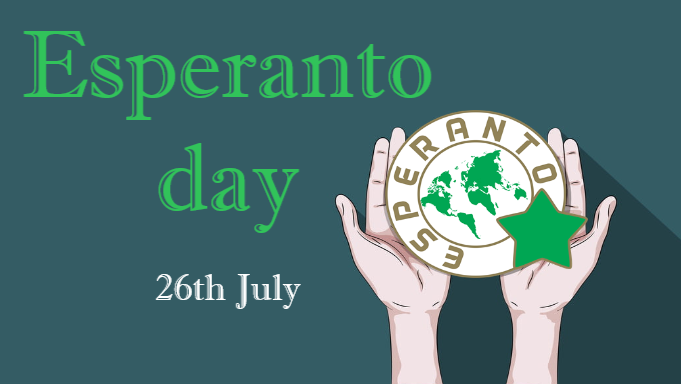 Why we celebrate Esperanto Day?

Have you ever heard of this artificial language? It was created so that people from different countries could communicate in the same language and understand each other. Esperanto united thousands of people around the world. It made a great contribution to the development of cultures and peoples. Thus, the language deserved a whole holiday that was celebrated in its honor. It was called Esperanto Day.

The language first appeared on July 26, 1887, in the form of a textbook. It was written by the ophthalmologist Ludwig Markovich Zamenhof. The man worked on it for 10 years. The language turned out to be very beautiful and simple. It also received high praise from the French Academy of Sciences and UNESCO. According to their recommendations, this language began to be taught in some schools.
It is possible to learn Esperanto in 2 months of daily practice. The language is easy to remember because it mainly consists of internationalisms of Latin and Greek origin. It comprises many of the words that are familiar to us. For example, geography – geografio, crocodile – krokodilo. The name “Esperanto” itself translates as “Hopeful”.

Now, there are many programs for translating foreign words. Programmed translators have simplified communication between representatives of different nations. But Esperanto is still relevant. It is freely spoken by about 2 million people around the world. Some people speak it from birth. On Esperanto Day, people congratulate each other. They present gifts, postcards, various books, and magazines. In some countries, Esperantists organize events. Interesting movies in the Esperanto language are broadcasted on TV.

How to Celebrate Esperanto Day?

Esperanto Day is an international holiday, but it is not considered a holiday. It is celebrated in Japan, Brazil, the USA, and some other countries. Most Esperantists live in Europe. The birthday of the creator of the language is also of particular importance. Zamenhof Day is celebrated on December 15th.