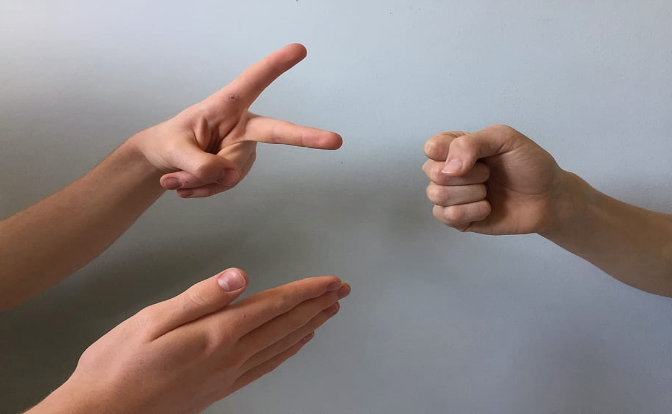 Rock Paper Scissors is a universally applicable game played by both adults and children. It helps to resolve disputes easily. For example, to decide who will walk the dog or more serious matters. It helps to avoid conflicts as well. After all, you can win the game only by your luck; all participants are in equal conditions. It has been existing for several centuries and has many times helped us make difficult decisions. Therefore, on August 27, we invite you to celebrate the World Rock Paper Scissors Day!

As we’ve already mentioned, the game has been existing for several centuries. It was invented in China. It has been transformed several times over its history, and now we call it Rock Paper Scissors. Gradually, it spread around the globe. In the 1920s, the game became popular in the UK. In the USA, it couldn’t gain ground at once. The New York Times published the game rules in 1932, but the Americans recognized it only after The Big Bang Theory series. Due to the global recognition of the game, the World Rock Paper Scissors Association in Ottawa, Ontario established a holiday to honor it. For the first time it was celebrated in 2014.

In about 200 BC in China, Rock Paper Scissors used to be played by emperors and military leaders. At that time, it was called shǒushìlìng, which can be translated as “hand commands”. Instead of a rock, scissors and paper, the Chinese used a frog, a slug, and a snake. The thumb showed a frog, as if sitting on a rock and watching everything. The little finger, being the smallest, meant a slug. The pointer finger showed a snake. By the 1700s, the game had reached Japan known as sansukumi-ken – the “fox fist” – with slightly different characters. In the game, the Japanese showed a fox, a hunter, a village, and a tribe leader. In France, there was also a game known as chi-fu-mi. As time went by, the Chinese hand game has conquered the whole world. Besides its traditional Rock Paper Scissors name, it has another one – tsu-e-fa, which means “ready-steady-go”.

Rock Paper Scissors is suitable for any life situation. People show any of the three signs at the same time. Rock wins over scissors, scissors win over paper, and paper wins over rock. Once this game helped to conclude a profitable business deal. Takashi Hashiyama from Japan couldn’t choose a place to hold an auction to sell his works of art. Two auction houses competed for his auction. Finally, the man offered their representatives to play Rock Paper Scissors. The winning house received a tidy profit from sales fees.

The World Rock Paper Scissors is celebrated annually on August 27. This day is celebrated all over the world, including in the UK and the USA. Make a small competition with your friends or neighbors. Prepare a pleasant prize for the winner and enjoy the cheerful celebration. Here are some winning tips. Most people show stone – most often these are men. But women prefer to show scissors. Paper is the least popular. Good luck!