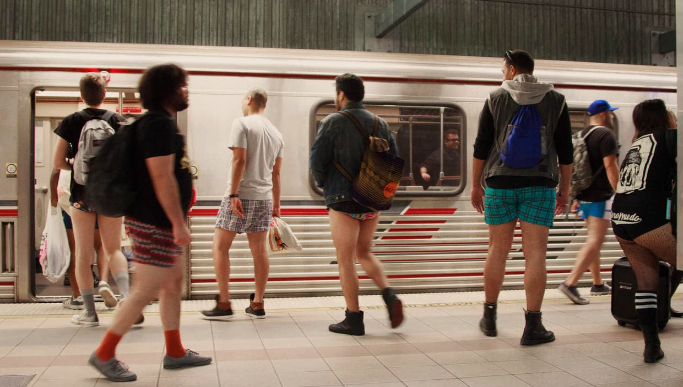 When is No Pants Subway Ride Day 2023

When is No Pants Subway Ride Day 2024

Why we celebrate No Pants Subway Ride Day?

No Pants Subway Ride Day is a flash mob designed for the sole purpose of having fun. People stay in their underwear while trying to act as naturally as possible, as if there was nothing weird about their behaviour.

The event was organised by comedy performance group Improv Everywhere and has received worldwide acclaim. Improv Everywhere was founded in 2001 in New York by Charlie Todd. Its main goal is to bring some chaos and fun into our world. The art group’s team also aims to do harmless pranks and flash mobs in public places. The first such trip was organised in 2002. At that time, there were hardly more than ten followers. In 2008, their number had already increased noticeably. Since 2013, this flash mob has been taking place not only in the USA but also in other countries.

On this day, people in many countries take off their trousers, trousers and skirts and then board the metro and ride it to their desired station. This event also becomes a “trap” for photographers, who can get great shots. Underground passengers themselves don’t mind showing off for the cameras. All people want to do is have fun. You shouldn’t think that only young people support the flash mob; in fact, there are a lot of older people among the participants.

How to Celebrate No Pants Subway Ride Day?

The event takes place every year at the beginning of January. The date is usually announced on the Improv Everywhere website in early December. In 2022 in the U.S. No Pants Subway Ride Day was held on January 9. But in Russia and other countries, for example, this flash mob was held on January 12. It’s easy enough to take part in this event – you have to stay in your underwear and look natural while riding the underground. You should be careful with the authorities – they may misunderstand you.