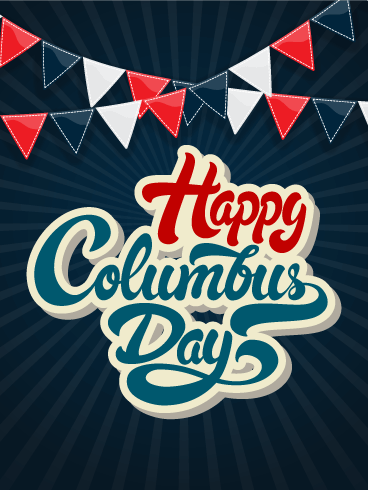 Why we celebrate Columbus Day?

He sailed west from Spain in 1492 and reached the islands of present day Bahamas. Columbus mistakenly thought that he had found a new route to the East, which at the time meant China, Japan, India, and the Indies. So he called the islands the “West Indies,” and the indigenous inhabitants “Indians.”

When Columbus left Spain in 1492, most people in the world thought there were only three large landmasses: Europe, Asia, and Africa. Although he didn’t realize it, it was Columbus who proved that idea wrong. Even though he thought he’d reached Asia, he’d opened up the New World to Europe. More importantly, unlike other explorers who only wanted to trade or travel, Columbus built settlements in the New World. These changes brought wealth and he possibilities of a new life in a New World to some individuals.
In 1892 President Benjamin Harrison issued a proclamation urging Americans to mark the Day.

Columbus Day always celebrated on the second Monday in October. The major celebration of the day takes place in New York City, which holds a huge parade each year.

How to Celebrate Columbus Day?

Columbus Day is a state holiday in many US states and not a day off in some states. Some government agencies may be closed. Enterprises and shops are open in states where Columbus Day is not a public holiday. Schools can work.